Chocolate Covered Popcorn is ready in only 15 minutes, and is perfect for kids parties.  It is also a great way to use up leftover Easter chocolate or Halloween candy, should you have such a thing. 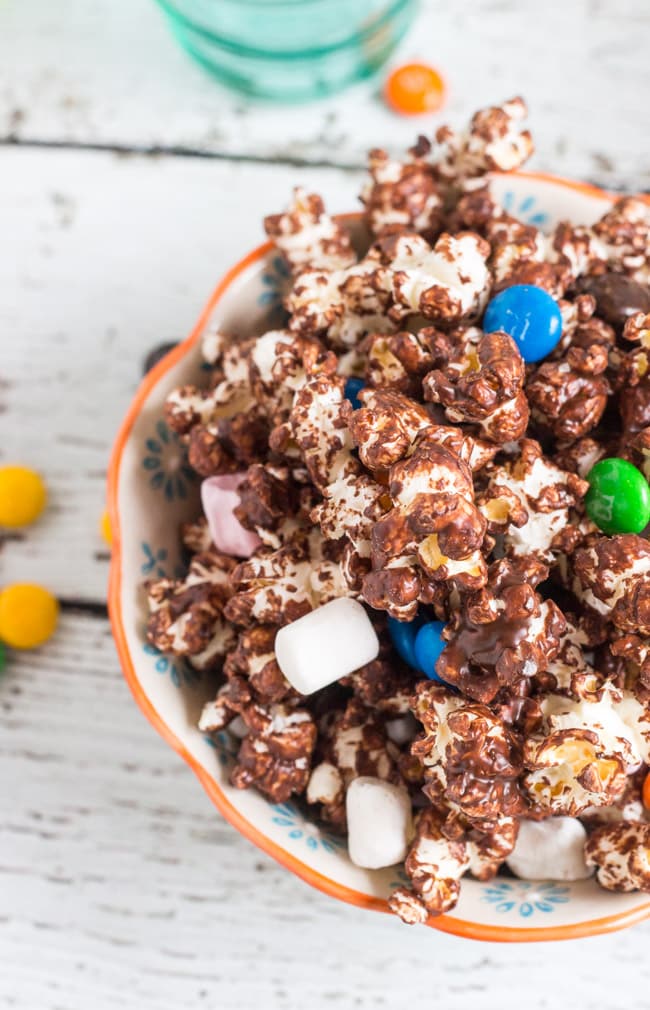 Picture this.  It’s six thirty in the morning the day before school finishes for the year.  I’m lying in bed contemplating dragging myself to the shower so I could get The Princess to the school bus in time when I hear the popcorn maker humming in the kitchen below. Now I know we have a lot of popcorn, but I was unaware it had become breakfast food.

Via some close quizzing (read yelling down the stairs) it transpired that The Princess needed food for a class party she had later that day.  To her credit, she had decided not to trouble me and was in the process of making her usual afternoon snack of popcorn with a load of butter dumped over it.  Nice idea, however I couldn’t see the buttery popcorn improving in flavour or texture by the time it came for the kids to eat it. 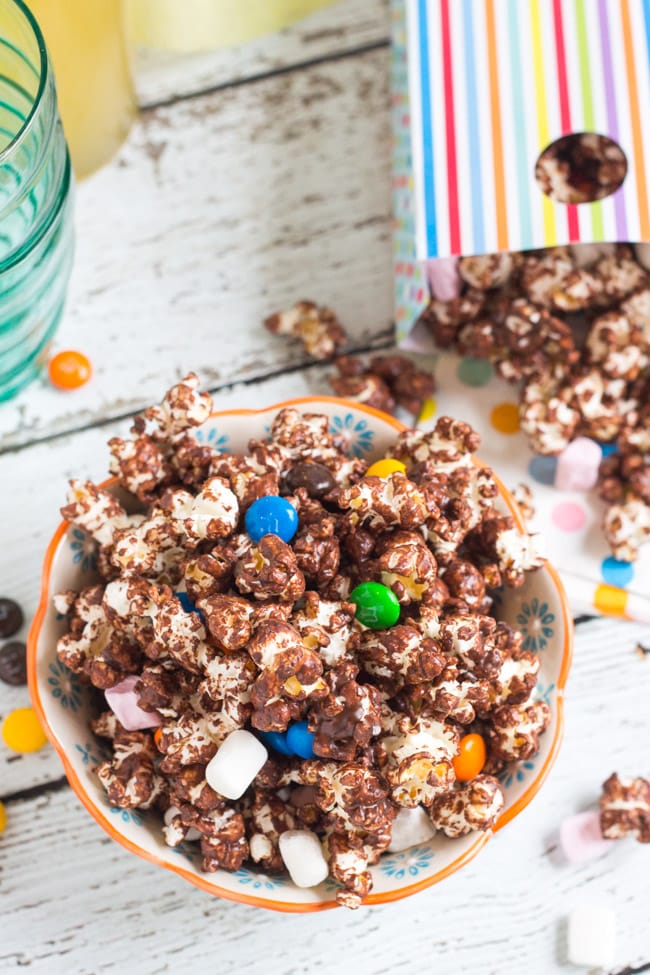 Following some quality thinking time in the shower, and with a small window to produce something if she was to make the bus, I threw together this Chocolate Covered Popcorn.  With three ingredients (four if you want to be fancy) it took all of fifteen minutes to make.

A quick word on the chocolate here.  Don’t use those nasty compound button things that Nestle try to pass off as chocolate melts to cover the popcorn.  These are a mix of sugar, vegetable fats, emulsifiers and milk solids, with some cocoa thrown in for colouring.  Chocolate should contain some proportion of cocoa solids.  If you can’t find cocoa solids in the ingredients list, go for a different brand.  We prefer dark chocolate, although milk or even white chocolate would work equally well.  And keep in mind that a batch of this Chocolate Covered Popcorn is a great way to use up any leftover Easter chocolate or Halloween candy. 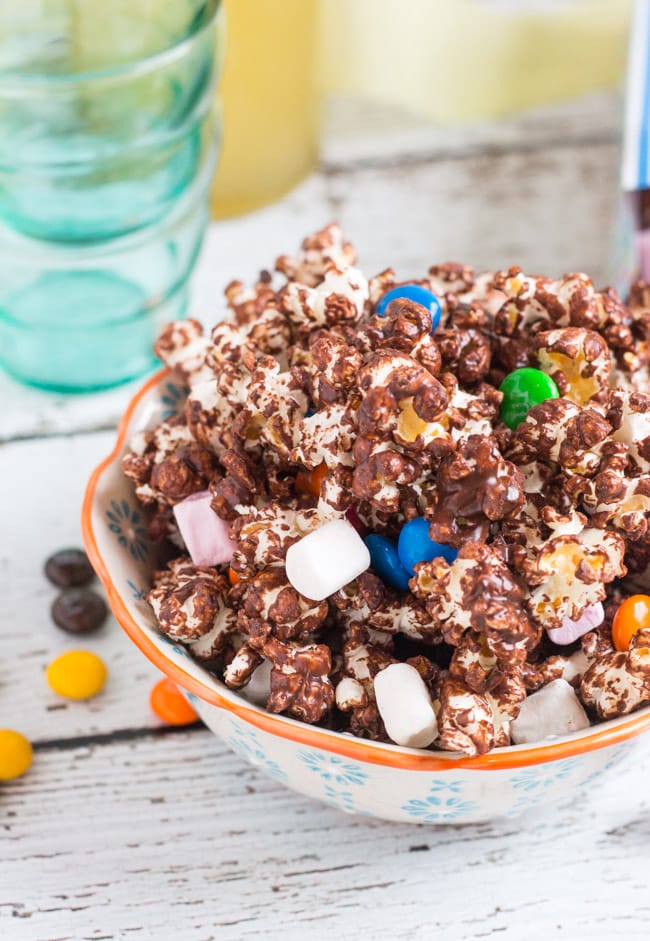 We don’t often have candy in the house, however on this morning I got lucky and had some small marshmallows and leftover M&M’s to work with.  If I had homemade marshmallows I would have cut them into pieces and used those instead.  I am sure that any small candy would work just as well, so use whatever you have to hand. 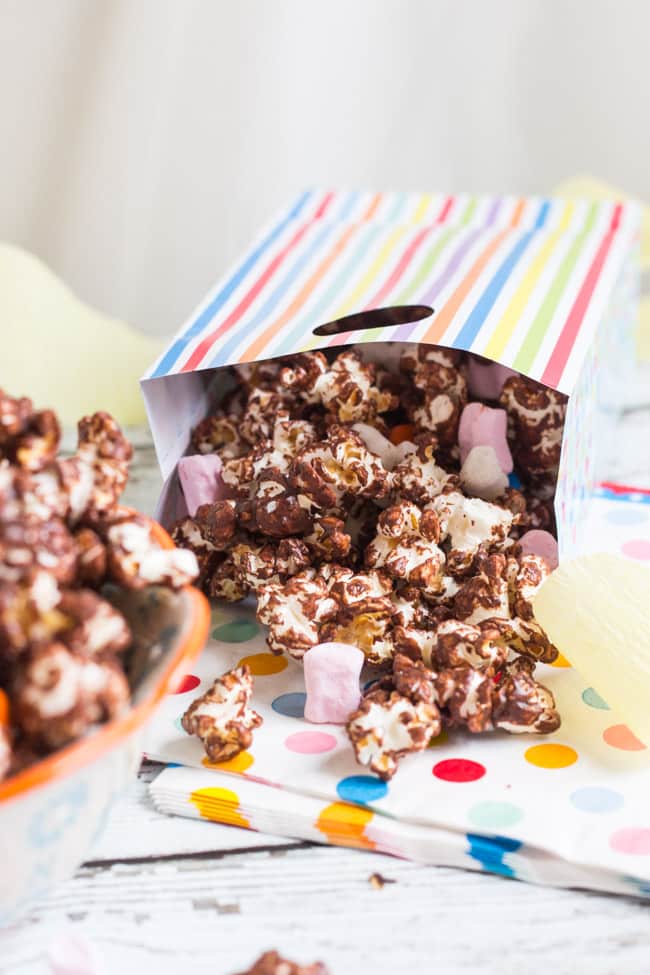 The Princess made the school bus with a big container of this popcorn tucked under her arm.  According to all reports it was well received by the children in her class, so apparently I am a genius. At least that is what I choose to believe. 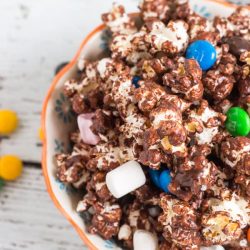 I have relied on random candy lurking in the cupboards to complete this recipe. I used leftover small marshmallows and M&M's. If you planned ahead you could make your own marshmallows and be choosy about any other candy you include.

This recipe produces enough for one class party, taking into consideration other children will be bringing food. If you are feeding more kids you may wish to double or triple the recipe.
Prep Time 15 minutes
Total Time 15 minutes
Servings 12 cups
Calories
Author Tania @ The Cook's Pyjamas

I use an air popper to pop my popcorn. If you do not have an air popper, heat a Tablespoon of coconut oil in a large saucepan (one with a lid) on a medium high heat. Add the popcorn, put on the lid and continue to cook, shaking the pot occasionally, until the popping slows. Continue with the recipe.