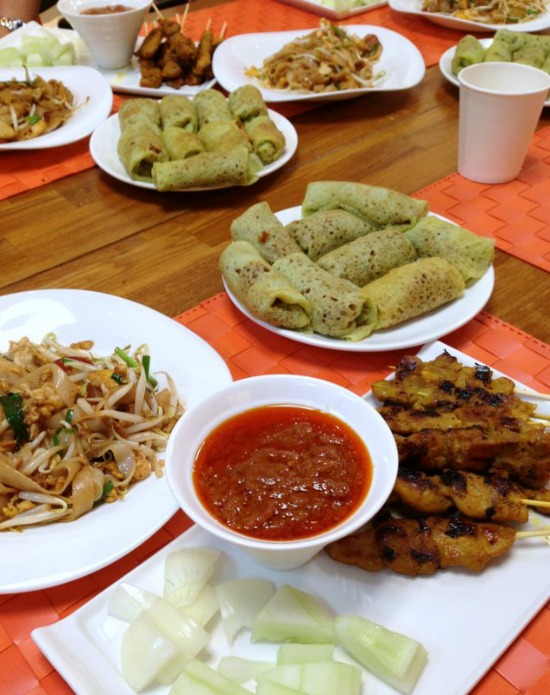 I find one of the best ways to truly appreciate a country’s food culture is to take a cooking class run by  locals.  I’ve been to Singapore a few times, eating in various hawkers’ markets and food halls, but it took a visit to the Food Playground cooking school for me to really understand the sheer breadth of Singapore’s food culture.

We arrived early to the class and amused ourselves decorating our paper chefs hats with coloured felt tips whilst waiting for the rest of the class to arrive.  Thankfully we were not assessed on our drawing skills.  Following introductions, our instructor Lesley took some time to explain to us the origins of Singaporean food.  The country has both Malaysian and Chinese influences.  The fusion of these two cultures gave rise to Peranakan cuisine which draws on elements of both.  Add to this Indian influences, and the range of traditional dishes available in Singapore is astonishing. 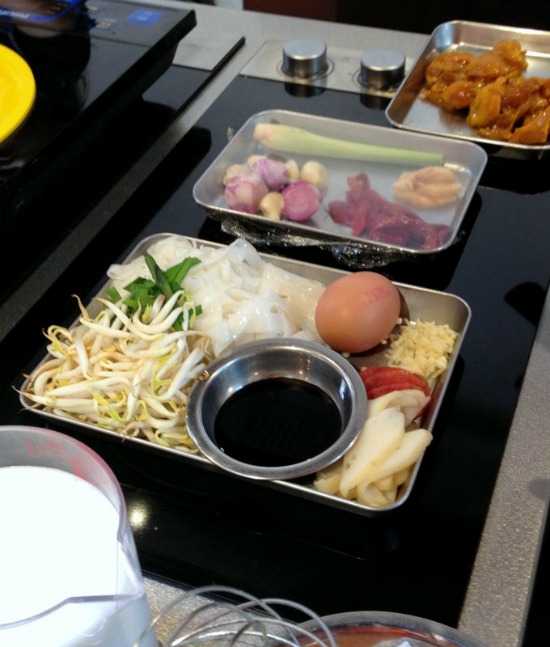 Lesley explained that traditional Singaporean dishes are easy to identify by their unlikely English names.  For example, black carrot cake appears regularly in hawkers markets yet bears no resemblance to the carrot and cinnamon baked good to which we are accustomed.  Rather, it is a dish of grated radish and rice flour that is first steamed to form a cake, then sliced and fried in a black sauce.  It is the English name that identifies it as a heritage dish.

Then it was time to cook.  Our class menu was Char Kway Teow, Chicken Satay and Kueh Dadar (pandan pancake).  Much of the preparation was done for us in advance so we could concentrate on cooking.  No recipes are provided at the start of the class to ensure we focused on the demonstrations rather than the handouts.  For someone who likes to make notes as I go, this was slightly disconcerting. However, the recipes and accompanying photographs from the class were emailed to us later in the day so it was easy to make notes whilst the class was still fresh in my head. 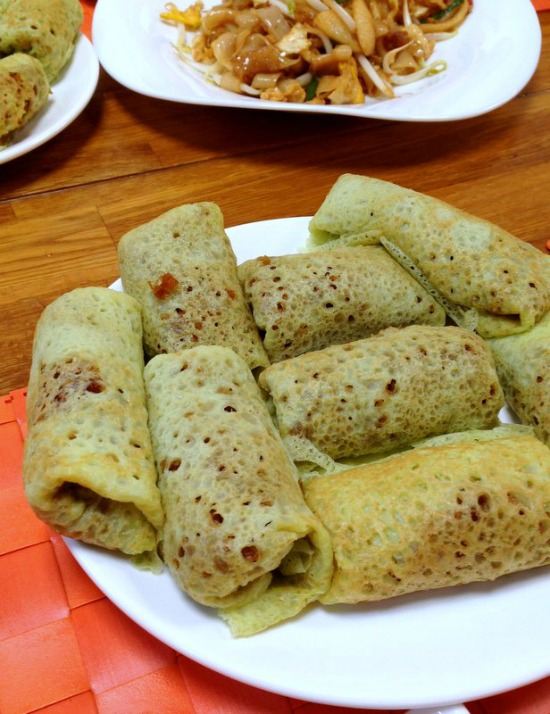 First up were the pancakes.  I am a sucker for pandan pancakes, and am always delighted when I find them in street markets.  For me, these pancakes are a great example of cultural and regional differences as I also cooked pandan pancakes during our Bali cooking class, but found the approach and recipe for the same dish to be quite different.

Working in pairs, one was responsible for cooking and filling the pancakes whilst the other was tasked with pounding the ingredients for the satay paste.  Even adding shallots to the mortar last did little to reduce the number of onion tears shed.  Whilst I had the easier task of cooking the pancakes, I took pity on my partner who had tears streaming down her face and swapped with her after she had done the initial hard work.  Thanks Dianna! 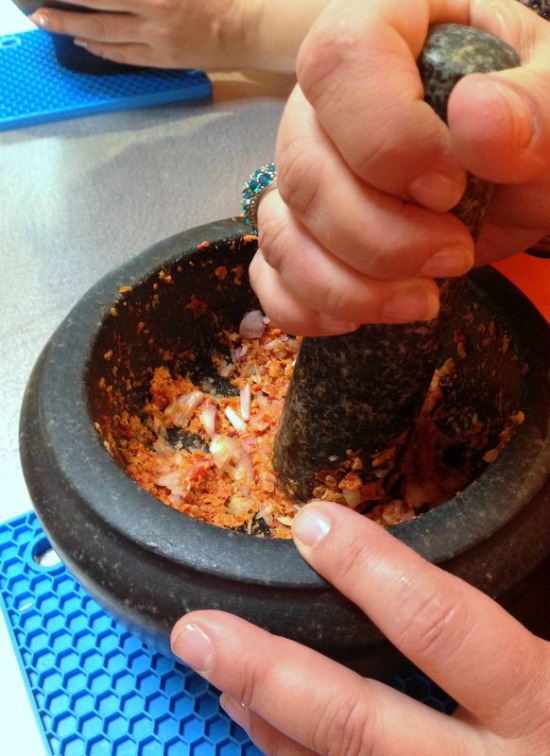 A small amount of the paste was mixed into the pre-marinated chicken, whilst the rest was poured into the fry pan to make satay sauce.  I was tasked with threading the meat onto the skewers, and there was much debate at our end of the table as to whether I had added too much or too little.  Grilling the sticks also proved tricky.  In order to get the ends to cook properly, I apparently allowed the middle to overcook.  Whilst I was thinking I had a nice amount of colour on my satay sticks, Lesley diplomatically exchanged my efforts for some she had made earlier.  In my defence, Mr Grumpy usually cooks the satay at our place so I’m not taking this as a sign that I am completely incompetent. 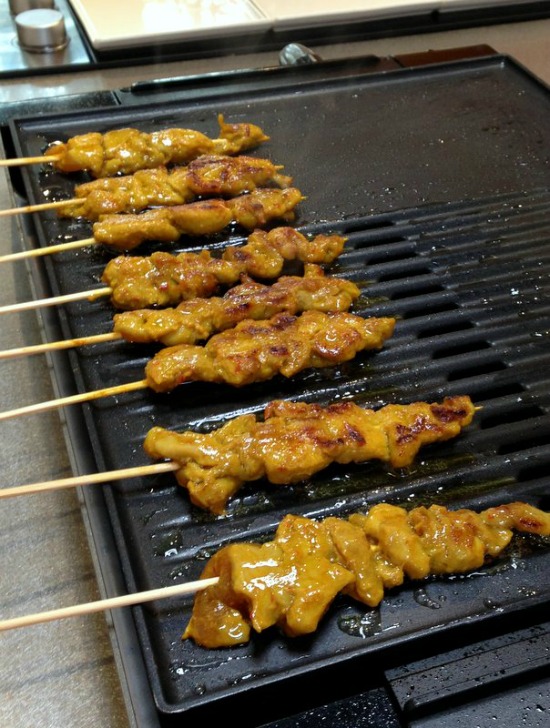 The Char Kway Teow comes together in minutes, so this was the last dish we cooked.  Everything had been prepared so that all we had to do was add the ingredients to the pan in the correct order and fry.  Quickly!! 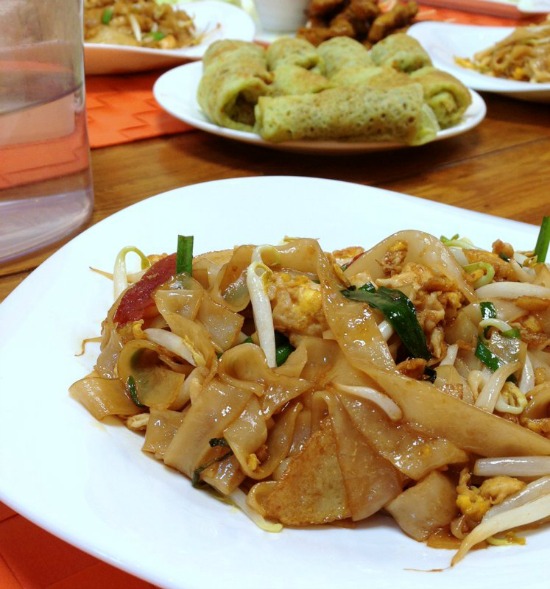 Then it was time to eat.  Despite a light breakfast, there was a lot of food to get through.  And even though we were convinced we could eat all of the pancakes, sadly we had to leave some behind.

Food Playground is an extremely well run cooking school located on the edge of China Town.  It is a great way to spend a morning, leaving you with the afternoon to wander the streets of China Town on a full stomach.  Do make sure you check out the lovely shop downstairs as you leave.