With a sheet of puff pastry, and a jar of applesauce, this ridiculously quick & easy apple turnovers recipe makes a simple yet delicious dessert. 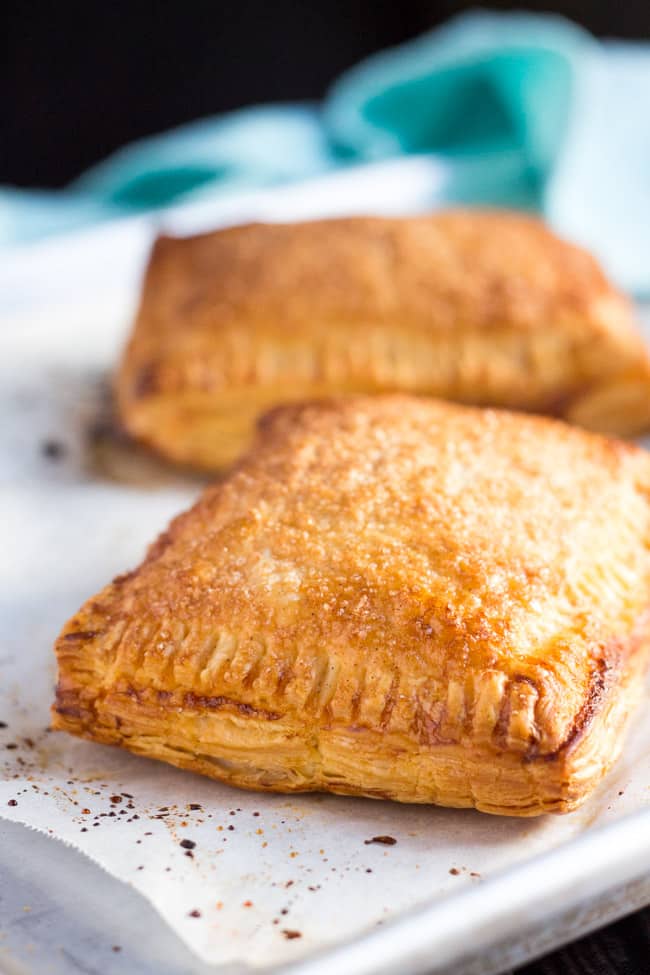 Dessert was not an everyday occurrence when I was a child.  I have fond memories of golden syrup dumplings smothered in custard, and large serves of bread and butter pudding (from which I would meticulously pick the gag-inducing plump sultanas).  One of my fondest memories, though, is of the apple turnovers that came in a box from the frozen food section of the supermarket.

Frozen desserts from a box were a novelty when I was a child.  If I am being completely honest this, rather than the high quality of product, is probably the source of my nostalgia.  I can still remember the sense of anticipation as mum removed the box of apple turnovers from the freezer.  She would brush them with milk, as per the instructions, and sprinkle over the little sachet of cinnamon sugar that came tucked into the box with the unadorned apple turnovers.  Whilst we waited for the turnovers to cook, my sister and I would fight to lick out the cinnamon sugar packet.

Take a sheet of #puffpastry, and a jar of #applesauce, & whip up this ridiculously #quick & #easy #apple #turnovers #recipe next time you are craving #dessert. Easy to make in advance, double the recipe & #freeze the… Click To Tweet

Fast forward a few years to my student days.  I was living on my own, trying to eke out my grocery budget enough to feed myself for the week.  If I was feeling slightly flush with funds, a packet of those apple turnovers would find themselves into my shopping trolley.  A packet of four would last a while, and I didn’t have to share the cinnamon sugar packet with anyone. 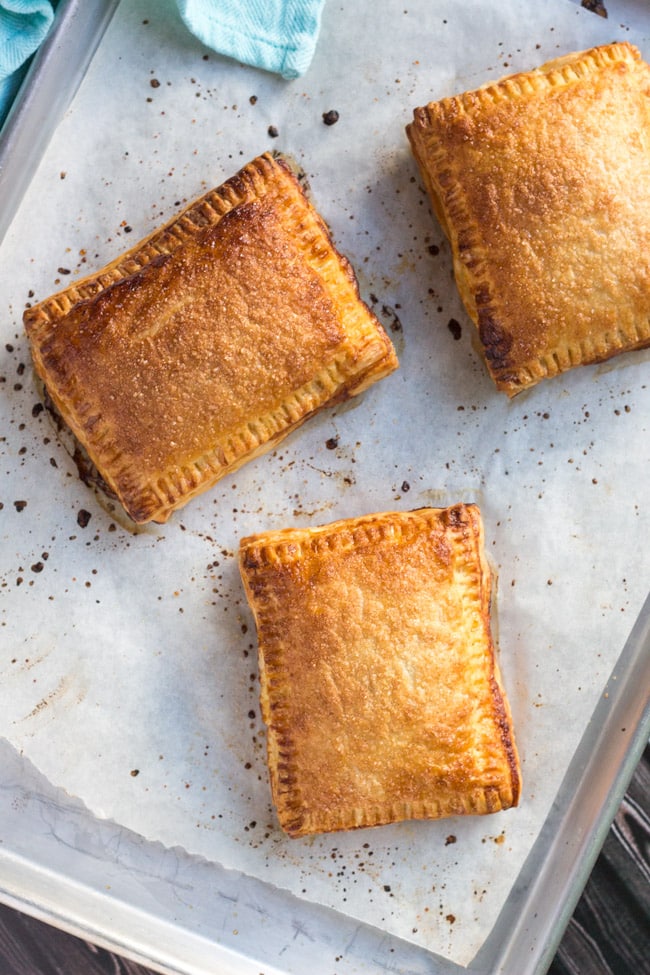 I hadn’t thought about apple turnovers for years, when suddenly this apple season I had a hankering for them.  I could have gone to the supermarket to buy a packet; I’m pretty sure they are still in production.  I’m also pretty sure that the purchased version would not match up to my childhood memory. Which meant I had to come up with my very own apple turnovers recipe.

My version relies on a couple of store cupboard staples; butter puff pastry and applesauce.  The desire for dessert usually strikes just after dinner, and the first time I made these I couldn’t be bothered peeling apples.  I had applesauce in the fridge, so used that instead.  Whilst not the apple turnovers of my childhood memories, these make an acceptable substitute. I’m happy with that. 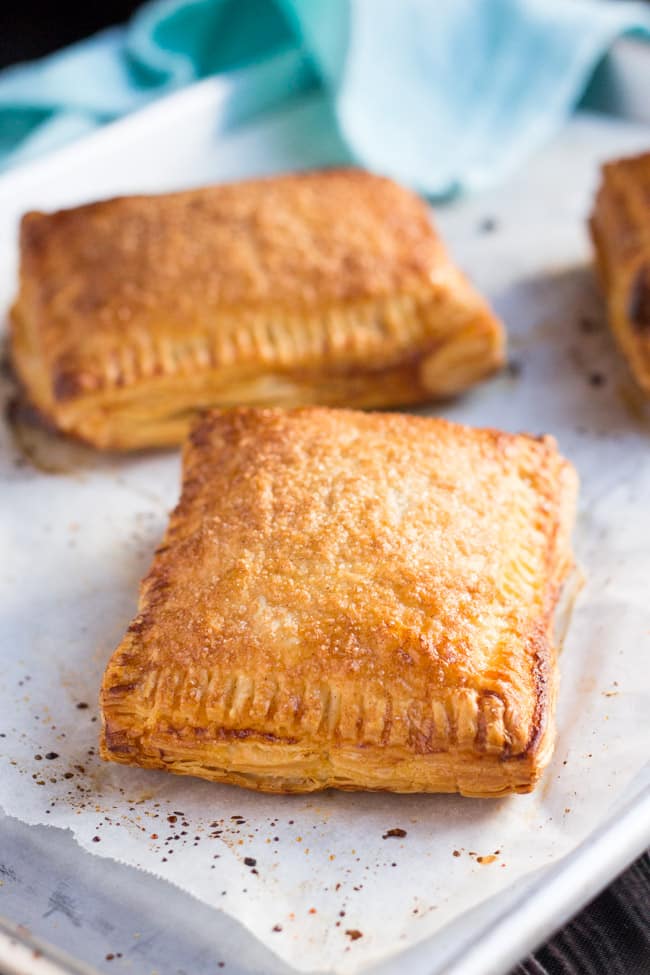 * We are a participant in the Amazon Services LLC Associates Program, an affiliate advertising program designed to provide a means for us to earn fees by linking to Amazon.com and affiliated sites.

With such a simple apple turnovers recipe, there are not many opportunities to make substitutions.  Don’t let that stop you making this your own though.  Try the following: 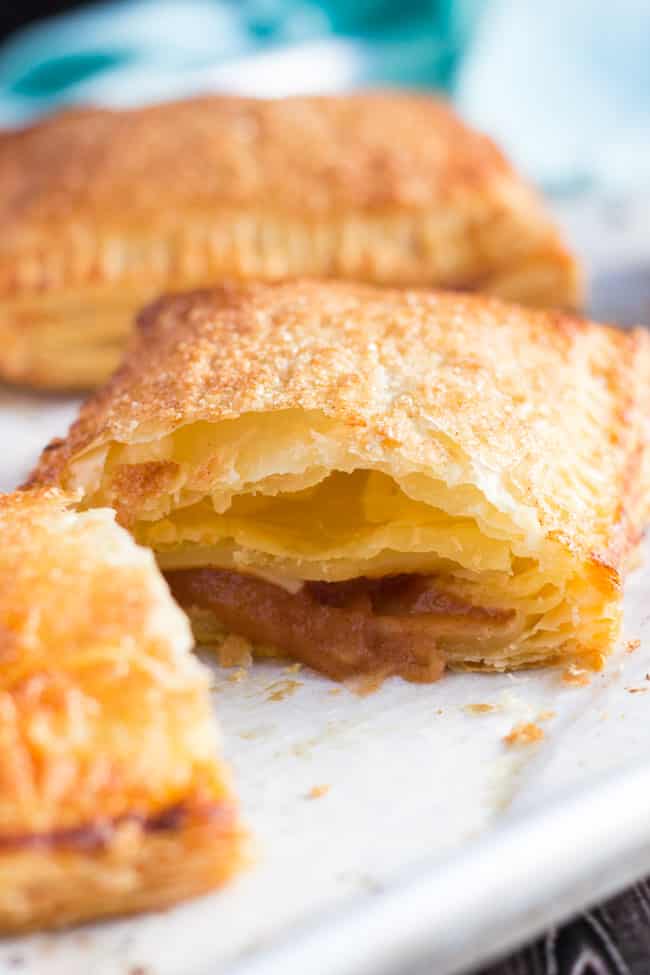 A Few Tips For Making My Apple Turnovers Recipe

Let me share a few tips I have discovered making this apple turnovers recipe:

What pastry do you use to make apple turnovers?  The best pastry to use for apple turnovers is butter puff pastry. The crunchy, flaky layers are divine paired with the delicious applesauce.

Made this recipe? Tell me how it went in the comments below.

And if you loved it, please don’t forget to rate it.

Update notes:  This post was originally published on 5th August 2015.  It was updated on 24th May 2018 to include ingredient substitutions, nutritional notes and frequently asked questions about apple turnovers.