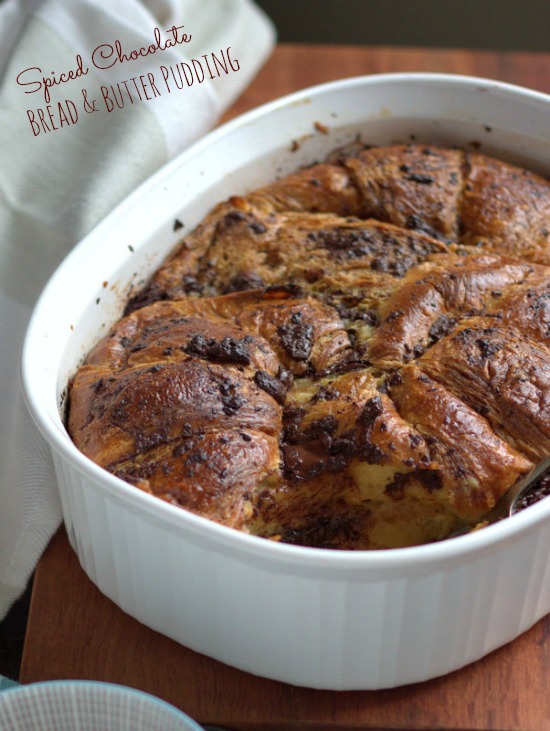 Christmas in a foreign country, far from family and friends, has the potential to be a very lonely experience.  Unless you happen to be one of eight ‘orphaned’ Australians crammed into a two-bedroom house in a southern suburb of London, together for the next 24 hours due to a temporary cease in the public transport that would allow us to return to our respective residences.  And so began one of the most memorable Christmases of my life.

It was cold enough to cool the beer in the back garden rather than the fridge, there was great music, Mario Kart rallies (it was the 90’s), and Ros and I cooked our first Christmas meal.  The crowning dish, served very late in the afternoon as we had grossly underestimated the amount of time it takes to cook such a feast, was this chocolate bread and butter pudding.

I have often thought of that pudding over the years.  Whilst the rest of that meal has faded from memory, I can still visualise the reactions around the table as we tucked into dessert.  All of us had had bread and butter pudding before, but this dessert was on a whole different level.  It was rich, and decadent, and a perfect end to our Christmas lunch. 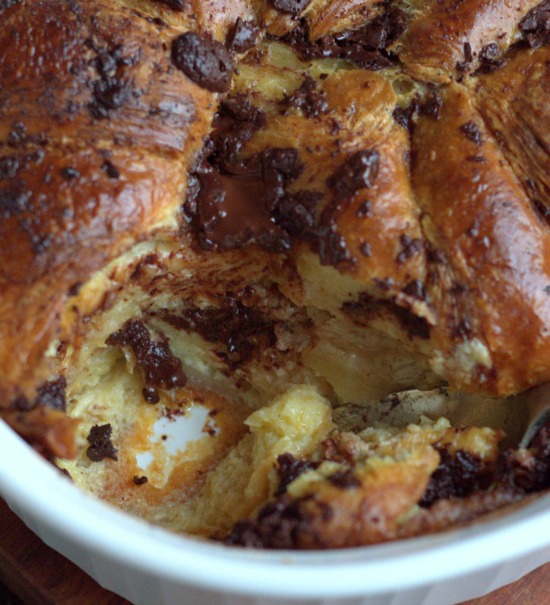 Mum would often make bread and butter pudding for dessert when I was a child.  She would tuck sultanas between the slices of bread, which would swell in the custard.  I loved the pudding but I hated those fat squishy sultanas, and would studiously pick them all out before tackling the now mangled pudding.  Occasionally I would miss one, the big fat sultana making me gag (have I mentioned I was a picky eater as a child?).  Picking sultanas out of your dessert is a lot less socially acceptable as an adult, so I didn’t eat bread and butter pudding for many years. 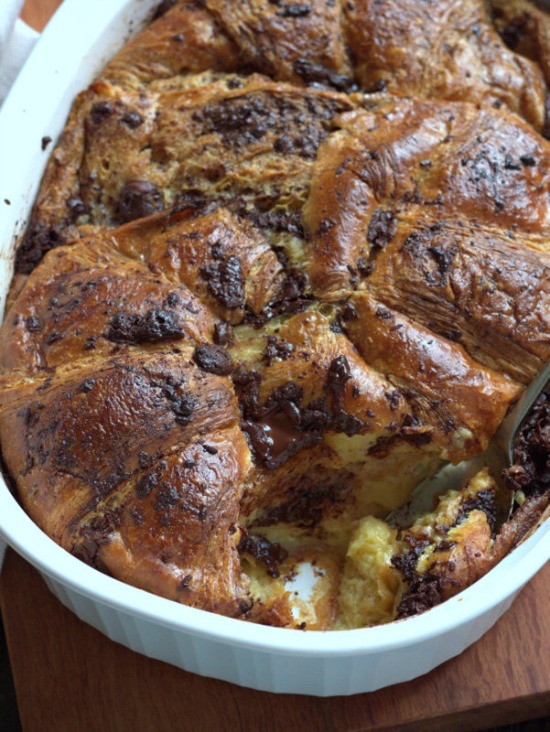 This pudding ticks all the boxes for me.  The squishy sultanas have been replaced by little nuggets of melted chocolate that seep into the custard.  The custard itself, spiced with cinnamon, vanilla and nutmeg, is absorbed by the buttery croissants.  The croissants, which replace the traditional bread, suck up the custard and puff in the warmth of the oven.

This dessert is true decadence; comfort food at its finest.  I have made it many times this past winter, as if making up for all those years that the recipe languished uncooked.  I have tinkered with it slightly to make it easier to cook, replacing the original pain au chocolate for the more easily sourced croissants, and changing up the spices,  yet it remains very true to the original.  It is still a cracker dessert, memorable even without the ‘orphan’s’ Christmas. 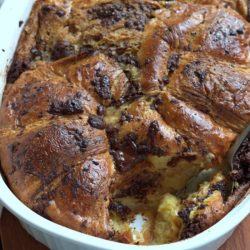 If you can readily obtain pain au chocolate (chocolate croissants) then use these in place of the plain croissants.

This pudding is best served warm, rather than piping hot, although I always find it difficult to wait that long. You can also reheat leftovers in a warm oven. The edges will crisp slightly but the pudding is still fabulous.
Prep Time 1 hour 5 minutes
Cook Time 30 minutes
Total Time 1 hour 35 minutes
Servings 6 - 8
Author Tania @ The Cook's Pyjamas (adapted from Sainsbury's Magazine)