Baked Berry Spelt Doughnuts are quick to make, packed full of berries, and are the perfect size for tucking into the lunchbox. The Princess has decided she hates muffins.  This is quite an annoying development, as muffins are quick to make and are the perfect size to tuck into a lunchbox.  Thankfully this aversion does not seem to extend to doughnuts, which is good as these baked berry spelt doughnuts are just as quick, if not quicker, to make than the hated muffins.

I’ve been on a mulberry binge of late, what with the mulberry curd, then the smoothie cubes, and now these doughnuts.  Due to my mulberry surplus, I have used mulberry puree in the doughnuts.  I do know that mulberries are sometimes difficult to come by, so feel free to substitute them with a different berry puree. Think blueberries, blackberries, raspberries or even strawberries. Frozen berries will work just as well as fresh, and if you happen to have smoothie cubes in the freezer you are already one step closer to making doughnuts. Baked doughnuts are quite different to their fried cousins.  Mr Grumpy insists on calling them doughnut-shaped cakes, refusing to call them doughnuts.  Traditional fried doughnuts are made with a yeast-raised dough that swells when the dough hits the hot oil. Baked doughnuts puff in the oven due to the addition of baking powder, ensuring the baked version is much quicker to make.  I do find the baked version will only keep for a day or two on the bench though, so prefer to store them in the freezer and defrost as required.

Whilst it is not necessary to glaze the doughnuts, I do like the additional berry layer the glaze adds.  However the doughnuts are just as tasty without the glaze if you either can’t be bothered, or have hungry children clamouring to be fed now.  I have added just enough icing sugar to accentuate the taste of the mulberry, but not enough to create a hard glaze on top of the doughnut.  If a hard glaze is your preference, I would double the sugar quantity in the glaze, and thin with a little hot water if necessary to maintain the dipping consistency. I am hopeful that I will eventually be able to convince The Princess that muffins aren’t all that bad.  In the meantime I will just have to keep baking doughnuts. 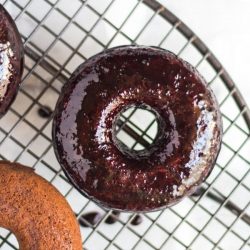 I have used mulberry puree for the doughnuts, although any berry puree can be substituted. To make the puree, I weighed the berries, then blitzed them to a puree with a hand held blender. Defrosted smoothie cubes could be used to speed up this process.

For the doughnut glaze

To bake the doughnuts

To glaze the doughnuts