One of the biggest revelations I had during my course was the impact having a few basic items in your kitchen, such as curry pastes and spice mixes, made in putting a meal together in a hurry. This year I want to pass that knowledge on to you through an occasional series called ‘Kitchen Basics’. The aim of this series is to give you an arsenal that you can draw on when the idea of putting a meal together seems too much like hard work.

In a simple meal, flavour is paramount. Flavour is primarily carried by fat. Stay with me. Despite being browbeaten over many decades with the message that saturated fat will kill you, there has been a slight shift in this attitude of late. Evidence is beginning to emerge that there may be some value in saturated fats after all. 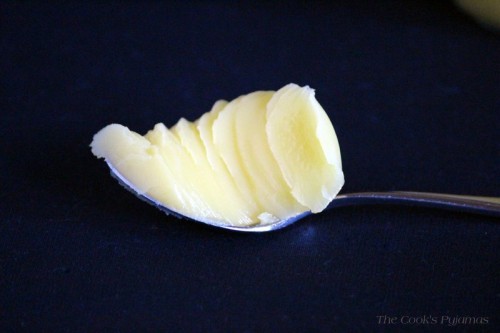 The saturated fat component of butter predominantly comprises short and medium chain fatty acids, which are quickly utilised by the body rather than being stored as fat. Many of the fatty acids found in butter have other health benefits: lauric and butyric acids help boost the immune system, whilst stearic and palmitic acids assist in lowering LDL cholesterol. Butter also contains the fat-soluble vitamins A, D, E and K, as well as copper, zinc, chromium, selenium, and iodine. The process of caramelising the milk solids creates antioxidants that help delay rancidity of the fat.1 Butter, and by extension ghee, may not be be so bad after all.

There are as many ways to make ghee as there are people who make it. I have been taught three different methods by three different people. The method I now use does take some time, but it doesn’t require you to hover over the pot constantly. I just set it going and check it from time to time whilst I am doing other things. 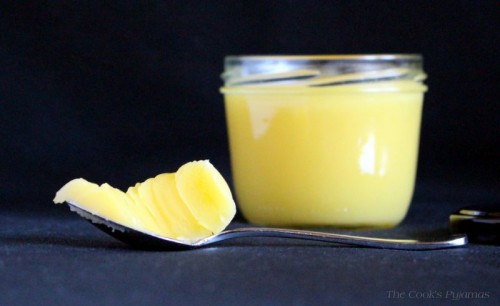 I encourage you to set aside your fat prejudices and give this a try. I know you can buy ghee in a green tin from your local supermarket, but the difference between that product and homemade ghee is incomparable. The Princess once asked me why I had cooked schnitzel in maple syrup. The sweet, caramel notes she tasted came from the inclusion of ghee in my frying pan. It is now a staple in my kitchen. I hope it will become so in yours. 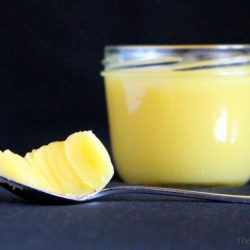 Kitchen Basics: How to Make Ghee

Buy the best butter you can afford to create ghee. Ideally it should be organic, but at the very least make sure your butter is from grass fed sources. Butter from grass fed sources has significantly higher levels of vitamins and minerals. The butter should be unsalted, unless you want salted ghee. Ghee has many applications, including sauteing spice bases for curry and shallow frying. Ghee will keep indefinitely but is best stored in the fridge, particularly in hot weather.
Cook Time 1 hour 30 minutes
Total Time 1 hour 30 minutes
Servings 175 mls
Calories
Author Tania @ The Cook's Pyjamas

The long cooking time allows the milk solids to slowly caramelise, developing flavour in the ghee. I usually set a pot going when I have other things to do in the kitchen and check it occasionally. You can shorten the cooking time by not using a diffuser, but you will need to keep a close eye on the pot as the ghee can go from dark brown to black in the blink of an eye.
Previous Post: « Watermelon & Mint Aguas Frescas
Next Post: Yes! Dessert for Breakfast: Easy Spiced Plum & Yoghurt Popsicles »