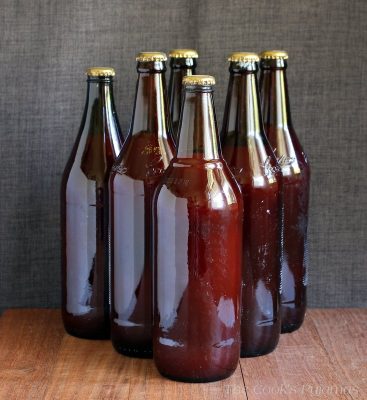 It has been all about tomatoes In My Kitchen this month. I have a group of friends who I make passata with, but due to hot weather and a lack of tomatoes it didn’t look like it was going to happen this year. Suddenly I got the call from my friendly supplier with what was likely to be our one chance for tomatoes this season. The catch was that we had to make passata that weekend. I don’t think we have ever organised ourselves quite so quickly. 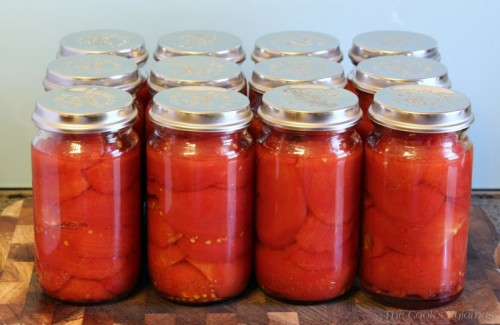 Twenty four boxes (or 240kg) of tomatoes makes 172 beer bottles of passata. Thirty four bottles each. I am now set for the year. I bought a 10kg box of tomatoes for myself at the same time. The box disappeared into 12 jars of whole tomatoes that will be used for stews and soups through winter, whilst the rest were slow roasted and frozen for mid-winter focaccias and dips. 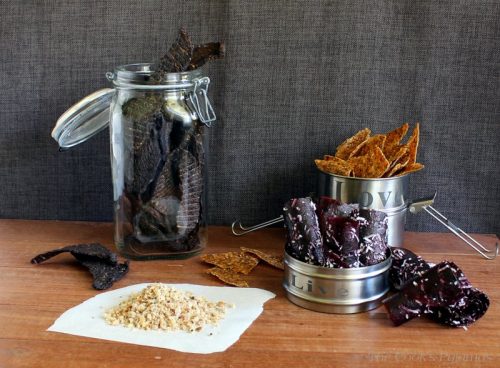 As it’s been too hot to bake I have been playing with the dehydrator instead. We are now on our second batch of beef jerky. This is really a work in progress. The first batch was quite tasty but I was unimpressed with the second batch. I just need to persevere until I find a recipe I like. I also experimented with a batch of corn chips to use up some tins of corn that had been lurking in the pantry. The corn was pureed with oven roasted capsicum, nutritional yeast, chipotle powder and salt and pepper. If the way The Princess is munching through them is any indication, the experiment was a success.

Next up was a large batch of Spiced Plum fruit roll ups. I get complaints about my bland fruit leather, so this time the plums were pureed with some vanilla and spices. Shredded coconut was then sprinkled over the wet puree. They are being eaten so I must have got it right this time. The spare trays in the dehydrator were given over to odds and ends of bread that had been turned into crumbs. The dry crumbs are stored in the freezer for coating chicken schnitzel and fish cakes.

The zucchinis are threatening to overtake the garden, and a moment of inattention often results in monster produce that must be used. I froze quite a lot for cakes and fritters through winter. The best method for freezing is to pack grated zucchini into zip lock or vacuumed packed bags. Don’t bother squeezing excess moisture out at this stage as the zucchini is easier to squeeze once defrosted. Even zucchini slice and chocolate zucchini cake didn’t dent the flow, however, so I made a batch of Kyrstie’s (A Fresh Legacy) Zucchini & Tomato Kasundi. I now have a manageable amount of zucchini left. 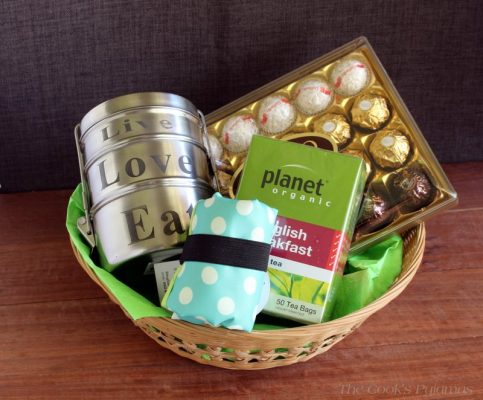 I managed to sit on the lucky table at the school fundraiser this month. Eight people on a table, and we won six prizes amongst us. One lady won twice. I was very happy with my hamper, particularly the little tiffin. 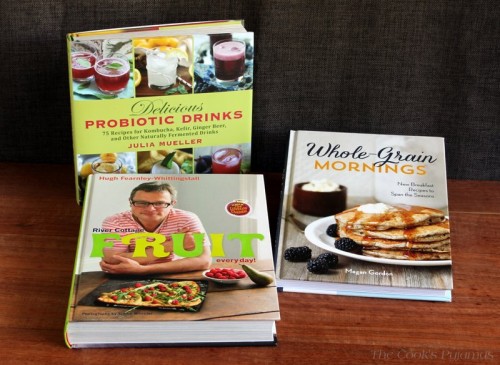 Finally, there are always books. Mr Grumpy gave me Hugh’s Fruit book for our wedding anniversary this month. This will go into heavier rotation once the weather cools, but we have already had a couple of good meals out of it. Breakfast is not one of my strengths, so I am going to try some of the ideas in Whole Grain Mornings. I also want to brew my own ginger beer, so the comprehensive instructions in Probiotic Drinks will come in handy.

That is it for my kitchen this month. Head over to Celia’s Fig Jam and  Lime Cordial to see what is happening in other kitchens around the world.