The Princess is currently in the midst of a major assignment on French culture for school.  One of the questions requires her select and report on a regional French food.  After running through the obvious choices (baguette, croissant, creme brulee etc) and discarding them all because they were, well, obvious she settled on an in depth analysis of aligot.  Aligot is a gooey, fondue-like dish made with almost equal quantities of potato and cheese, and a little garlic and butter for flavour.  Just in case the large quantities of cheese weren’t enough, most recipes also advise thinning the mash out with cream or creme fraiche if it is still too thick.   Really though, aligot is just glorified cheesy mash.

Being the awesome mother I am, I promised The Princes I would make aligot for dinner one night so she could write about it with some authority.  We all like cheese, and mash, and Mr Grumpy likes to take leftovers for his lunch, so I made a large batch.  This proved to be a slight mistake.  Aligot is rich.  Really rich, and a little goes a long way so a large amount was left over.  More than even Mr Grumpy could handle. Not wanting to feed the leftover mash to the chickens (it was full of raclette – not a cheap cheese) I decided to repurpose it for another meal later in the week.  On a whim I made little cakes, coated them in breadcrumbs and, as I already had the oven on, baked them.  Genius (if I do say so myself).  The cakes turned out perfectly, with a lovely crunchy exterior and a soft, cheesy interior.  I didn’t make nearly enough though, because they disappeared very quickly and there were requests for more.

This surplus of leftover mash is not an isolated event in my house. I always far make too much.  My previous attempts at leftover mash potato cakes have been less successful, as I tried to fry the cakes instead.  As the butter and cheese in the mash soften with the heat, the potato cakes melt in the pan and stick to the base, making them almost impossible to serve neatly.  The potato cakes hold up better when baked, and are easy to slide onto the plate. These potato cakes would work quite well with other leftovers mixed into them; chopped up roast chicken, finely diced roasted broccoli or even wilted cabbage, making a colcannon patty.  Whilst I cannot see myself making aligot again in a hurry, I will definitely be making extra mashed potato in future just so I can make these leftover mashed potato cakes. 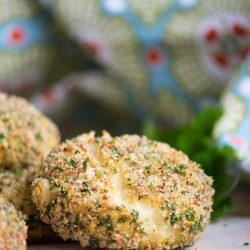 These will work with any leftover mashed potato, even if you have added ridiculous quantities of cheese. They will soften and split, but the breadcrumbs will still give a crunchy exterior.

This is more a method than a recipe. Just adapt it according to the volume of mash you have leftover. The cakes will be gluten free if you use gluten free breadcrumbs to coat.

It is easier to mould the potato into patties if the mash is cold.
Calories
Author Tania @ The Cook's Pyjamas

Mix other leftovers into your mash for a change. Finely chopped chicken would be good for lunch cakes, whilst chopped cooked green vegetables would work well as a side dish for chicken or fish. You could season the breadcrumbs with anything really. Try other chopped herbs, sumac, cayenne pepper or even finely grated Parmesan.