The Continuous Brew Kombucha Method is an easy way to ensure you always have a steady supply of this refreshing, probiotic-rich drink.  All you need is a SCOBY and some sweetened black tea, and you will be well on your way to greater gut health. *This post was originally published in February 2015.  With the rise in interest in kombucha I felt it needed an update.

You must have been living under a rock if you have not heard of kombucha by now.  In the two years since I originally published this post, I have seen a significant rise in the availability of kombucha commercially.  And more people are now brewing it at home, which is great news for me.  My friends and relatives have long stopped giving me sideways crazy-lady glances and started to come to me for advice on how to make it themselves.

Before I dive in, I want to stress that I am by no means an expert, and there are as many ways to brew kombucha as there are people brewing it.  This post details the method that I use.

So What Is Kombucha & Why Should I Drink It?

Kombucha is a refreshing probiotic-rich drink produced by fermenting sugar-sweetened tea. The tea is fermented by a SCOBY (Symbiotic Culture of Bacteria and Yeast), which is also referred to as the mother, a mushroom or (in my house) ‘the alien blob’.  They are not pretty to look at, but a SCOBY is certainly a conversation starter.

Kombucha is purported to have significant health benefits, and is supposed to cure any number of health problems.  I drink it because I like the taste, and I find it a simple way to get my daily dose of probiotics, although as an aside I do find that it does help my digestion. What Is The Continuous Brew Kombucha Method?

I first started brewing kombucha in a large glass jar.  Each new batch required me to remove the SCOBY, drain off the fermented tea, replenish the brew, then replace the SCOBY to start the next batch.  It was a complete pain, and generated a lot of dishes.

Once I switched to the Continuous Brew Kombucha Method I have not looked back.  The Continuous Brew method uses a large glass or ceramic drink dispenser with a tap at the bottom. Fermented tea is drawn off the bottom of the brew using the tap, and then fresh sweetened tea is poured into the top to replenish the fermentation process.  It’s that simple.  You can draw off as little or as much fermented tea as you like before replenishing the brew with new tea, which I find to be a significantly easier process than batch brewing.

Another major benefit of the Continuous Brew method is that the SCOBY remains in the fermentation vessel the entire time, which reduces the risk of contaminating your brew with mould and fungi As stated, I am no expert on this subject, and the method detailed here is the one I personally have had the most success with.  Everybody has their own way of brewing kombucha, so tweak or change my method to suit your own situation.  What is important here is the end result; a batch of fermented tea.

To start your Continuous Brew, you will require a SCOBY and at least one cup of fermented tea.  There are three ways to obtain a SCOBY:

I have specifically outlined the method I use in the recipe below, but the general process I use is as follows. Brew four cups of strong tea using black or green tea bags. Allow the tea bags to steep until the brew is cold, then squeeze out the tea bags and discard. Add 1/2 cup of raw sugar and 4 cups of filtered cold water, and stir until the sugar dissolves. Pour the sweetened tea into the drink dispenser, add the SCOBY and a cup of kombucha, and set the drink dispenser aside until a new SCOBY forms on top of the brew.

The Continuous Brew #Kombucha Method is an easy way to ensure you always have a steady supply of this refreshing, probiotic-rich drink Click To Tweet

It is important to note here that you MUST NOT add your SCOBY to a hot tea brew, as hot water can kill your SCOBY.

When I first fill my drink dispenser, or after cleaning out the container, I repeat this process over a week until the container is full. To initially fill your dispenser, it is not necessary to wait until a  new SCOBY is completely formed when adding your next batch of tea.  Wait until a cloudy film forms on top of the tea (this is the start of the new SCOBY), and add your next batch of tea.  This staged method of filling the dispenser allows each new batch of tea to ferment slightly before the next addition, which will speed up the complete fermentation of your brew.

After the addition of each new batch of tea, cover the mouth of the dispenser with cloth or muslin and secure with a rubber band.  Do not put a lid on the jar, as Kombucha requires oxygen for fermentation.  Set the drink dispenser aside somewhere it will not be disturbed, and wait for the new SCOBY to form.

Kombucha activity is very temperature dependent, so the tea will ferment faster in warmer weather.  Start tasting the brew once a new SCOBY has formed and thickened.  Mine takes about one week in summer and slightly longer in winter.  The brew is ready when the taste is to your liking.  I prefer mine to be quite acidic but The Princess likes it a little sweeter.  If the brew is too sweet, allow it to ferment for a further day or two then taste again.

Once I am happy with the taste, I draw off enough for my immediate use using the tap at the bottom of the vessel, then brew more sweetened tea as above and pour this over the top of the newly formed SCOBY.

This process can continue indefinitely, although it may be necessary to clean the vessel occasionally to prevent spent yeast cells blocking the tap. Secondary Fermentation: How To Make Your Kombucha Fizzy.

To create unflavoured fizzy kombucha, fill a flip top glass bottle (or similar) with freshly fermented kombucha, leaving a 10cm gap at the top of the bottle. Seal the lid and set the bottle on the kitchen bench for two – five days.  When you see small bubbles developing in the brew, transfer the bottle to the fridge.  Open the bottle with care (to prevent the contents covering the kitchen) and enjoy your sparkling kombucha drink.

If you wish to flavour the kombucha, add any flavourings to the bottle before topping of the bottle with fresh kombucha brew.  Experiment with flavourings to find something you love.  My favourites to date are:

I strain my secondary ferments before drinking, although this is personal preference and certainly not necessary.   I just don’t like ‘bits’ in my drinks. Use green or black tea to make your initial Kombucha brew.  Herbal teas will not work for the initial brew, but can be used to flavour your secondary ferment.

I use organic raw sugar to sweeten my tea.  I have heard of others using rapadura, maple syrup or honey to sweeten the tea, however I have also read anecdotal reports that this can lead to the death of the SCOBY.  I prefer not to take the chance.

A new SCOBY forms every time fresh sweetened tea is added to the vessel.  Initially the top of the brew will seem covered in pond scum; this is perfectly normal.   Over a few days this layer will thicken into a creamy white mat on the surface of the liquid.

Over time, the new SCOBY’s will form a thick layer in the jar.  At this point, I remove some of the SCOBY’s to make room for more tea.  These spare SCOBY’s can be composted, stored in a SCOBY hotel, or shared with friends.  If you decide to gift your SCOBY, just make sure to include at least a cup of liquid so the recipient can start a new batch.

Contamination of a batch is unlikely, but it can happen.  If grey, fuzzy mould starts to form on the SCOBY, discard the entire batch, including the SCOBY, and start again with a new SCOBY.  As a new SCOBY forms, patches of what looks like white mould start to appear on the surface.  However, this is related to the formation of the new SCOBY and is nothing to worry about.

From time to time, brown strands can be seen hanging off the SCOBY.  These strands form from spent yeast cells and are a normal part of the fermentation process.   Eventually they will drop to the bottom of the vessel, and form a brown filmy layer.  This will not need to be removed unless it starts to interfere with the operation of the tap. The interest in kombucha has seen an explosion in the number of books on the subject.  Some of the favourites from my personal library include:

Wild Fermentation: The Flavor, Nutrition and Craft of Live-Culture Foods.

The Art of Fermentation: An In-Depth Exploration of Essential Concepts and Processes from Around The World. 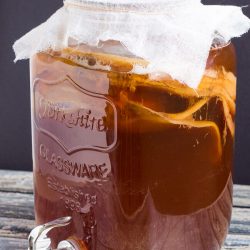 The Continuous Brew Kombucha Method is an easy way to ensure you always have a steady supply of this refreshing, probiotic-rich drink. All you need is a SCOBY and some sweetened black tea, and you will be well on your way to greater gut health.
Prep Time 5 minutes
Total Time 5 minutes
Calories
Author Tania @The Cook's Pyjamas

Kombucha activity is very temperature dependent, so the tea will ferment faster in warmer weather. Mine takes about one week in summer and slightly longer in winter.

* This post contains affiliate links.  Should you make a purchase, I will receive a small commission at no additional cost to you.