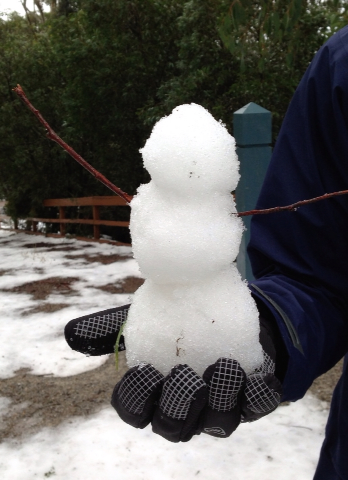 Mr Grumpy recently spent some time in the far north of Western Australia watching a hole being dug. Apparently hole watching is exhausting work, as on his return he declared that he needed a holiday. Whilst away he met the owner of four self-catering cottages in the Yarra Valley, and so a few weeks later we found ourselves headed to Victoria. 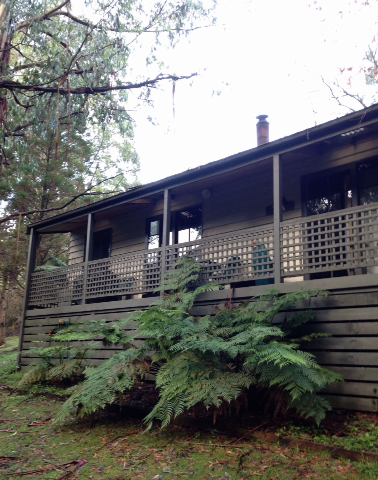 Hill ‘n’ Dale Farm Cottages are located in the forest approximately 15 minutes south of Healesville on the edge of the Yarra Ranges National Park, and are perfectly situated to explore the region.  Our two-bedroom cottage was the best self-catering accommodation we have stayed in to date (and we have stayed in a few). The cottage, heated by both wood-fired heater and reverse cycle air conditioning,  was warm even in the depths of winter. A very generous (and much appreciated) breakfast basket containing eggs from the onsite chickens, orange juice, bread and assorted cereals, tea and coffee was provided for the first morning but was large enough to supply us for a few days.  We also had a great time cracking the bag of hazelnuts that were supplied in the cottage, harvested from the onsite trees.  Fresh hazelnuts have a creamy texture that is sadly missing from their store-bought cousins.  The Princess put the birdseed supplied in the cottage to good use, and fed the local parrots each morning.

Although wineries weren’t on the agenda this trip, there was still more than enough to occupy us during our four day stay. The Dandenong Ranges were an easy drive from our accommodation, and we spent a leisurely day exploring the small towns in the region.  The main street of Olinda is lined with many little shops and cafes, and The Princess and I enjoyed browsing the different wares whilst Mr Grumpy hovered outside trying to urge us on.  After a hearty lunch in one of the many cafes, and a wander through the adjacent National Rhododendron Gardens to appease Mr Grumpy’s curiosity, we headed south to Sassafras for afternoon tea. Miss Marple’s Tea House sits prominently on the main street of Sassafras.  I was up for a Devonshire Tea but Mr Grumpy, the quintessential humbug,  baulked at the carols playing for Christmas in July and refused to cross the threshold. Luckily there were a number of cafes to choose from, and whilst I didn’t get my Devonshire tea I was more than happy with half of The Princess’s passionfruit cheesecake.  Not yet sick of tea, we wandered into Tea Leaves, also on the main street, with over 300 different varieties of tea and a delightful assortment of character tea pots.  The Princess has recently developed a habit for herbal tea in the evening so picked up a few new varieties that caught her eye. 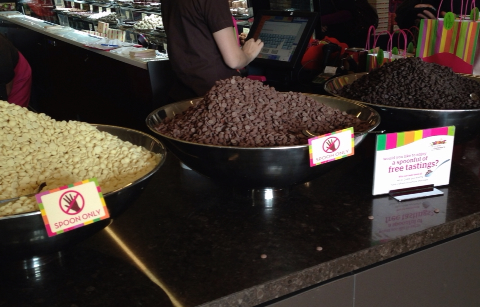 The Princess was adamant that we visit the Yarra Valley Chocolaterie & Ice Creamery at some point during our stay. Thanks to previous experiences with similar establishments I had my reservations, but was pleasantly surprised.  The chocolate is of a high quality, and there are a number of different ranges providing a point of difference from standard chocolate bars.  Large bowls of white, milk and dark chocolate buttons are placed on the counter as you enter, allowing you to sample before exploring further.

I noticed another counter to the side as I entered, with sample platters of their Kitchen Garden Range, and it was only after I had helped myself to a couple of the different varieties that I realised I had managed to crash a tour group’s private sampling.  The joy of ignorance, because I can now highly recommend the Caramelised Sesame & Celery bar, as well as the Toasted Coconut & Curry Leaf.  Despite being close to lunchtime, Mr Grumpy and The Princess felt that a pre-lunch snack of chocolate sorbet was necessary.  The serves were huge, and in retrospect they could have shared a cone between them. Not that The Princess is all that good at sharing. 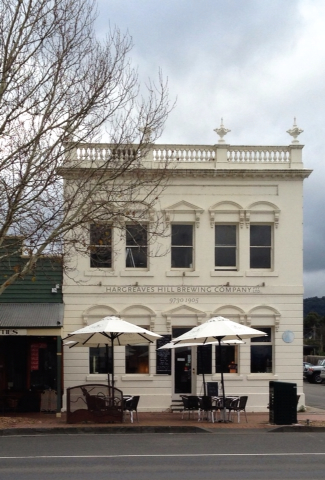 Lunch at Hargreaves Hill Brewing Company in Yarra Glen satisfied My Grumpy’s brewery curiosity, then on to Yarra Valley Dairy for afternoon tea. Although Mr Grumpy and The Princess protested they were full of chocolate sorbet and lunch, they had no problems demolishing their third of the wheel of Le Jack that we purchased to accompany our cup of tea.  A surprise discovery was that a white mould sheep cheese is a perfect compliment to English Breakfast tea.   At least in our opinion.

Despite reports the following day for snow at the summit of Mount Donna Buang,  there wasn’t much to see but enough to satisfy The Princess. The snow had turned icy and hard, which did not stop her from trying to make a snow angel.   A large bowl of soup was called for after the cold, and there were enough eating places in Warburton to make it difficult to choose the perfect place for lunch. The Old Tea Shop in the main street has over 200 different varieties of tea to choose from, and made a great stop for an afternoon cup.  We finished the day at the Hedgend Maze in Healesville, where no matter how hard we tried we could not lose The Princess in the maze. 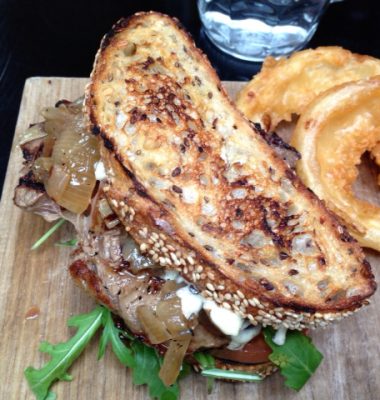 There are many eating choices in Healesville, including some great alternatives if you are self catering. Kitchen & Butcher in the main street is a one stop shop for foodies. We took advantage of the home cooked pre-prepared meals in their freezer section.  The pork ragu was any easy option at the end of a busy day.  Yarra Valley Pasta, located further along the main street, have a large range of ravioli, pasta sauces and gnocchi, perfect for a quick dinner.  A chicken and a large serve of roast vegetables from Sammy’s Charcoal Chicken provided another great value dinner.

We had a great time exploring the Yarra Valley, even without a single winery visit.  Our mission at the start of the holiday was to have a relaxing time and to eat as much good food as possible.  Mission accomplished.

* Excuse the photos.  They were all taken with my iPhone, and being winter the light was not all the great.