Molly is my fiercest food critic, even harsher than The Princess who occasionally tries to preserve my feelings. The joy of being five, I suppose, is that you are not hindered by the social niceties that plague the rest of us and you can say what you think. Molly is quite partial to my strawberry marshmallows, and was equally unimpressed with my final batch of brownies. When I told her I was thinking of trying chocolate marshmallows, her exact words to me were “You should make them, then give them to us to try and we can tell you if they are any good.”

I was stunned as to how easy marshmallows were to make, and how delicious the homemade ones truly can be. Now I have a basic formula, I keep dreaming up different variations for flavouring them. Chocolate marshmallows for Easter seemed an obvious choice. These marshmallows are flavoured with cocoa powder rather than melted chocolate. Melted chocolate would primarily contribute more sugar to the mix. Having reduced the amount of sugar in the initial recipe, I was not interested in adding sugar back if it could be avoided. I also still have the majority of the three kilograms of cocoa powder which I lugged back from Paris last year, so cocoa powder it is.

There are two types of cocoa powder: natural and Dutch. I used to think, many years ago, that Dutch cocoa was a vastly superior product exported from Holland’s rich cocoa fields. Let’s gloss over the fact that I have a Geography degree, and that I should have realised that a tropical plant like the cocoa bean was unlikely to thrive in the cool temperate region of Holland, let alone become a major export. I possibly should also have realised that if cocoa was a major export, it would have been mentioned alongside other Dutch icons like tulips, windmills and clogs. Natural cocoa powder is quite acidic. When baking with natural cocoa it is necessary to use baking (bicarb) soda as a raising agent. The alkalinity of the baking soda counteracts the acidity of the cocoa powder, and the resulting chemical reaction helps baked goods to rise. Dutch cocoa powder has undergone processing with an alkalinising agent to reduce the acidity of the natural product. This process was invented by a Dutchman. Who would have thought. Dutch cocoa powder is a darker colour and has a smoother flavour than natural cocoa. It is also less acidic, and therefore baking powder can be used as a leavening agent in baked goods. As with everything, the quality of both Dutch and natural powder varies greatly according to supplier.

I prefer to use Dutch cocoa powder as I love the dark rich colour it contributes to chocolate goods and I really can notice the smoother flavour. If you have a chance, do a comparison between natural and Dutch cocoa. Dip your finger into both and taste the difference. I find natural cocoa powder is sharper and harsher than the Dutch, and the colour of the end result is not as deep. To keep the chocolate theme going, I have coated these marshmallows in a mixture of cinnamon and cocoa powder which gives a little spice to the mix. Mr Grumpy was playing with a test batch and sprinkled some with chilli powder. After I recovered from the coughing fit that ensued as the chilli caught in my throat, I conceded that a small amount would be a great addition if you like a touch of heat.

The Princess has taken to dropping these into her afternoon hot chocolate. Apparently chocolate marshmallows go better with the beverage than strawberry. And most importantly, Molly has given these her approval. 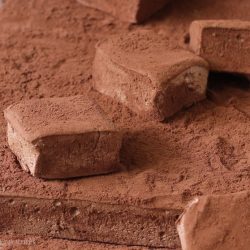 You do need a candy thermometer to make your own marshmallows. There is no way of getting around this. If you don't own a thermometer, buy one. They are cheap. I promise that after one batch you will be putting that thermometer to good use.
You also really do need a stand mixer but these can possibly be made with a hand held. Just be prepared to stand there for a while. I haven't tried to make them this way, however, so can't guarantee they will work.
You can cut these anyway you like. I have made them into cubes (as above) using a pizza cutter and have also used cookie cutters to cut shapes.
The marshmallows will keep for at least a week in an airtight container.
Calories
Author Tania @ The Cook's Pyjamas

I have used Dutch cocoa powder in these marshmallows. You can use either Dutch or natural cocoa powder. Marshmallows are sticky. The spiced cocoa powder is your friend. Sprinkle it on any sticky surface. I use the whisk attachment on my stand mixer to make these. To clean up, put the saucepan and mixing bowl in the sink and fill them with water. Put all your implements in the water and walk away. Come back 10 minutes later and everything will have softened and dissolved, making it easy to clean.
Previous Post: « Easy Dukkah-Spiced Lamb Koftas
Next Post: Kitchen Basics: How To Make Homemade Chicken Stock »