These little flavour bombs are a great way to use up a glut of cherry tomatoes.  Toss oven dried cherry tomatoes through pastas and salads, spread them over bread or just eat them straight from the tray. It always seems like a great idea to plant multiple tomato plants.  Those first few homegrown cherry tomatoes are eagerly awaited and highly coveted.  As the season progresses however, the prolific plants produce tomatoes at a faster rate than they can be consumed. It is at this point I stop savouring each individual tomato, and start making trays of oven dried cherry tomatoes to use up the glut.

I have used many different methods to dry tomatoes; a long, slow oven, a hot oven switched off overnight, a day in the final heat of the woodfired oven, and I have even used Mr Grumpy’s BBQ in a pinch. The method I choose is usually dictated by the weather conditions, yet the result is always the same.  Deeply savoury, concentrated tomatoey nuggets, nestled in pools of flavoured oil and concentrated tomato juice. Oven dried cherry tomatoes have many uses.  Tossed through summer salads, scattered over pizza, stirred through pasta or added to a cheese platter.  The last time I cooked these, in Mr Grumpy’s new toy, the baking tray barely made it inside before the tomatoes and their juices were squashed onto sourdough crackers.  The Princess even eats them directly from the tray as a snack.

Once cooked, the tomatoes will keep for a few days in the fridge in an airtight container.  Some recipes recommend covering the tomatoes in olive oil to extend their storage time.  Personally the tomatoes never last long enough in our house to go this extra step. Large amounts could also be frozen, and pulled out in the depths of winter for a little blush of summer.  If you did wish to freeze the tomatoes, use the same method as for my slow roasted tomatoes. You don’t need to grow your own tomatoes though to make these oven dried cherry tomatoes.  When my own plants have exhausted themselves, I have used punnets of supermarket tomatoes quite successfully.  Drying the tomatoes turns insipid supermarket specimens into something quite sublime.

So whether using up a homegrown glut or adding some flavour to those supermarket tomatoes, give oven dried cherry tomatoes a try.  I promise you won’t be disappointed.  Maybe we’ll plant more tomatoes next year after all. 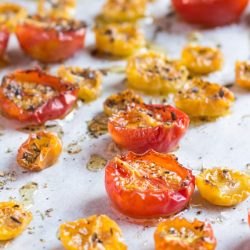 I don't use specific quantities when making these tomatoes. I just throw the tomatoes onto a tray and sprinkle the seasonings over the top. Go easy on the oregano though; you can have too much of a good thing.
Prep Time 10 minutes
Cook Time 3 hours
Total Time 3 hours 10 minutes
Servings 1 tray
Calories
Author Tania @ The Cook's Pyjamas

P.S. Have a tomato glut?  Why not make Slow Roasted Tomatoes or Slow Cooked Tomato Pasta Sauce.  Or whip up a Tomato, Pesto & Goats Cheese Tart.