Mini Rosemary Roasted Potatoes are crispy, crunchy and quicker to cook than conventional roast potatoes. The perfect side for pretty much everything. It would appear that both The Princess and Mr Grumpy are quite picky about how potatoes appear on their dinner plates.  If I cook boiled or mashed potatoes, both will take the minimum serve possible.  Roast the potatoes and they might deign to take more.  Make a tray of these mini rosemary roasted potatoes and they will pile as many as they can on their plates.

Who knows what it is about these rosemary roasted potatoes that make them so appealing.  It may be the high ratio of crunchy exterior to fluffy interior.  It may just be that my family like to annoy me.  Personally I think it is the latter. I initially made these mini roasted potatoes one evening when conventional roast potatoes were planned, yet I found I had not left myself enough time for the potatoes to cook if we were to eat dinner at a reasonable time.  So I chopped the potatoes into smaller pieces, threw them into the oven and hoped for the best.  Nobody was more surprised than I when not only did they turn out well, but were wolfed down by both The Princess and Mr Grumpy. Needless to say, these mini roast potatoes are now a regular feature on my dinner menu.  I’ve played around with them over time, trying out different flavour combinations.  And whilst they are very good simply tossed in salt & pepper, I really like the flavour that rosemary adds.

My preference is to toss them in shimmering hot duck fat or pork lard, which creates a gloriously crisp exterior.  Not very “health conscious” but so very good.  The potatoes also crisp up very well in olive oil if you are after a vegetarian option.  If using animal fats, heat the fat in the roasting tray until smoking hot, then quickly toss the potatoes in the fat and allow them to roast away merrily.  If using olive oil, coat the potatoes before they go in the oven.

These rosemary roasted potatoes make a great side dish for almost anything, and are well loved in our family.  I like to serve them alongside chicken schnitzel, a simple piece of pan-fried fish or roast chicken.  And if the frequency with which The Princess requests them is anything to go by, she likes them almost as much as sweet potato chips.  Quite the recommendation I assure you. 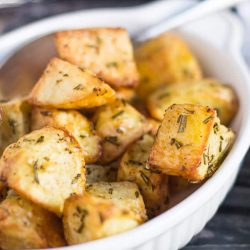