Fried cabbage with bacon is a truly simple side dish that almost cooks itself, allowing you to get on with the rest of the meal. Ready in 20 minutes, fried cabbage pairs well with almost everything, so how can you afford not to add this versatile dish to your culinary arsenal. *We are a participant in the Amazon Services LLC Associates Program, an affiliate advertising program designed to provide a means for us to earn fees by linking to Amazon.com and affiliated sites.

I have a small arsenal of simple side dishes that I regularly pull out when a quick and/or easy meal is necessary if we want to eat that night. Roasted broccoli, crispy sweet potato chips and this simple dish of fried cabbage and bacon make up the core of this arsenal.  I can pan fry a piece of fish or chicken schnitzel, or make weeknight roast chicken, add the sides, and dinner is sorted.

Kale is not the only brassica going gangbusters in our garden this year.  We are finally having some success with cabbage too.  Despite only planting the smaller Sugarloaf variety this year, the cabbages all seem to have come to a head (so to speak) at once.  So this dish is appearing regularly at the moment.  There are no complaints though.  Even The Princess is happy to eat a serve.  It could be the threat of no dessert, but I prefer to think it is the crispy nuggets of bacon hiding amongst the cabbage. I use smoked streaky bacon and pancetta interchangeably in this recipe. They both work equally well, and I make the choice as to which to use according to what is in the fridge at the time.

There is no oil in this recipe.  That is not an omission.  The fat for frying the cabbage is supplied by slowly rendering the fat in the bacon over a low heat.  This adds an amazing flavour to a dish, and is a technique I use often in my cooking.  And if you are worried about using the rendered lard from the bacon, don’t be.  Recent research indicates that saturated fats are not as bad for our health as we have previously been led to believe, so enjoy all the flavour without the worry.

Ready in 20 minutes, #fried #cabbage with #bacon is a truly simple #sidedish that almost cooks itself, allowing you to get on with the rest of the meal. Click To Tweet

You can make this dish vegetarian if you wish.  To do so, omit the bacon, and fry some crushed garlic (I would use 1 clove) off in ghee or butter before adding the cabbage. Make sure you season the finished dish liberally with salt and pepper.

Red cabbage can also be used to make this fried cabbage with bacon, and it is still a very tasty dish, but in my opinion it is not quite as good as the dish made with green cabbage. I sometimes fry off a crushed garlic clove in the rendered lard for a bit of additional flavour.  Do this just before adding the cabbage to the pan.  This is not a necessary step, but garlic just elevates the fried cabbage with bacon to another level.

Some varieties of bacon release less fat than others.  If you don’t have at least two tablespoons of rendered lard in the pan once the bacon is cooked, add a little butter, ghee or olive oil to the pan before adding the bacon.  Butter or ghee will add more flavour to the final dish.

I like to use a good, heavy based fry pan for this dish.  Such a pan allows the bacon fat to slowly render without burning. It is possible to cook the cabbage in advance, and just reheat it gently in the fry pan prior to serving.  I have done this on more than one occasion quite successfully.

Taste the cooked cabbage prior to adding any salt. Some cured meats are saltier than others, and often no extra salt is required.

Made this recipe? Tell me how it went in the comments below. And if you loved it, please don’t forget to rate it. 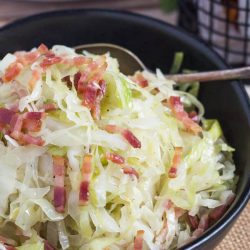 Fried cabbage with bacon is a truly simple side dish that almost cooks itself, allowing you to get on with the rest of the meal. Ready in 20 minutes, fried cabbage pairs well with almost everything.
Prep Time 5 minutes
Cook Time 15 minutes
Total Time 20 minutes
Servings 4
Calories 105kcal
Author Tania @ The Cook's Pyjamas

Some types of bacon release less fat than others.  If there is less than 2 Tablespoons of fat in the fry pan once the bacon is cooked, add some butter, ghee or olive oil to the fry pan before you add the cabbage.

*This post was originally published in September 2014.  It has been substantially updated from the original.